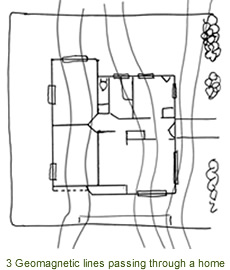 Posted at 09:54h in Hazards by Malcolm Romano 0 Comments
0 Likes

I know very well that many scientists consider dowsing as they do astrology, as a type of ancient superstition. According to my conviction, this is, however, unjustified. The dowsing rod is a simple instrument which shows the reaction of the human nervous system to certain factors that are unknown to us at this time.’ Albert Einstein

The practice of geomancy was originally derived from Celtic and Germanic cultural traditions. Druids, priests and community leaders would dowse to determine the most appropriate and beneficial site to build homes, churches, the town well and town square. These places were the hub of the community and would therefore be positioned in a powerful place. Examples include Ayers Rock, Stonehenge, the Egyptian Pyramids and the Oracle of Delphi. Geomancy is a tool that is used to discern and influence the health of the energy of an area. It takes into consideration both the positive and negative sites including sacred sites, sacred geometry and the earth mysteries. The basic premise of geomancy is that we have a close and subtle connection to the environment around us; a relationship which extends far beyond the obvious physical connection that we encounter in our everyday lives.

Geopathic stress may arise from both natural and man-made activities; excavation and mining being two such examples. Daily disturbances of the earth’s magnetic field produce variations in geomagnetic activity which is reportedly associated with widespread effects on human health and behaviour including the way in which we dream (Lipnicki, 2009). Types of geopathic stressors include geological faults, geomagnetic lines, ley lines and water courses.

Health concerns concerning geopathic stress were first raised by German Doctors in the 1920s when they were investigating cancer clusters in several villages. Von Pohl was alleged to be able to predict the incidence of cancer of two towns using a map. Most of the health concerns associated with geopathic stress are anecdotal – this is because there is currently no scientific equipment to adequately measure these fields. Alleged symptoms may range from unexplained fatigue, sleep disturbances, mental and behaviourhal disorders to infertility and chronic immune problems.

The solution will depend on the type of geopathic stress.

In 2003, Druids were recruited by Austrian motorway authorities as a last resort to address a notorious accident spot on the autobahn. As a result of their success in reducing the number of fatalities from an average of six per year to zero at the site, they have since been employed to address other black spots across the country (Leidig, 2003).

Hazards You Should Know About